Does it happen to you that you live in a city, visit or pass by its landmarks often and don’t think twice about it? Then you see an Instagram photo or a blog post about your city and realize that sometimes you take its most treasured sights for granted? Or don’t stop to appreciate them more often?

Once I moved to California, I returned to Philadelphia several times a year for work, but my arrivals into Philadelphia were via the airport. I rarely visited 30th Street Station.

Last week I returned to the east coast for a wedding and to visit family and friends. We were staying with friends in New Jersey, and since I did not have a car, I rode SEPTA from Trenton, New Jersey, to visit Philadelphia for the day.

As I arrived into 30th Street Station, I stopped to wonder. The station has been refurbished in recent years, returned to its original glory, and it is truly an architectural and historical sight to see. 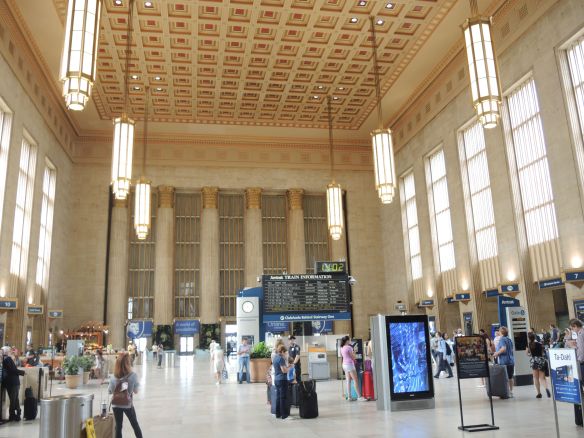 The ceiling is so high with columns at either end of the station, lending to its stately presence.

The regional SEPTA trains do not depart from the main tracks in the central hall, but to access those tracks you must walk through this grand space. 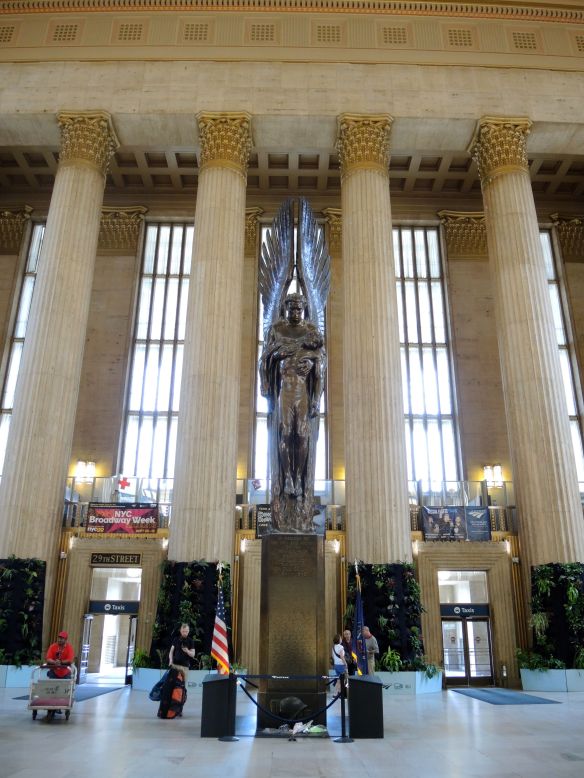 Angel of the Resurrection (1952) by Walter Hancock honors members of the Pennsylvania Rail Road that died in World War II.

The hall below is in-between the main center hall and the area of the station with Amtrak ticket windows and rental car agencies. I like that it is kept simple and open. Passengers are lined up for one of the Amtrak tracks accessed from the main hall. 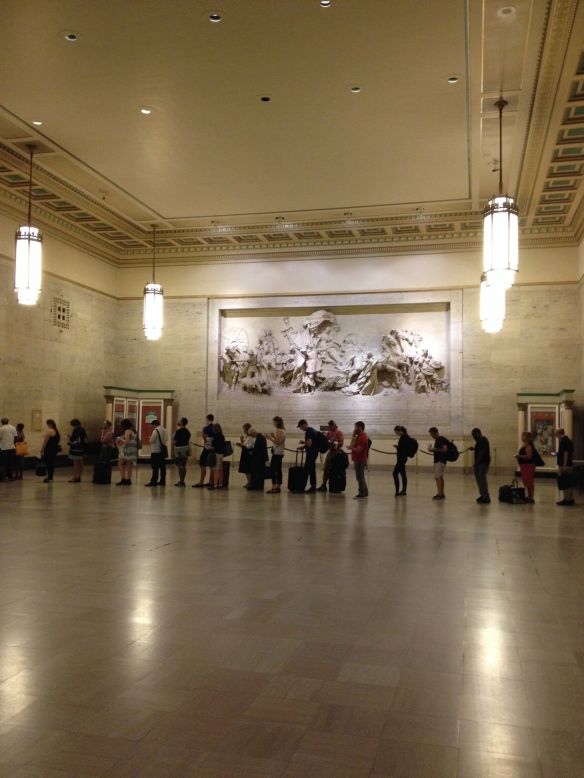 The flipping train schedule board is in the center of the main hall. A few days after I visited the station, news broke that the sign would be replaced by an LED sign. I wish I had recorded video of the sign changing. As I was taking pictures, I heard the clack, clack, clack as the train departure and arrival information changed, and it made me smile. 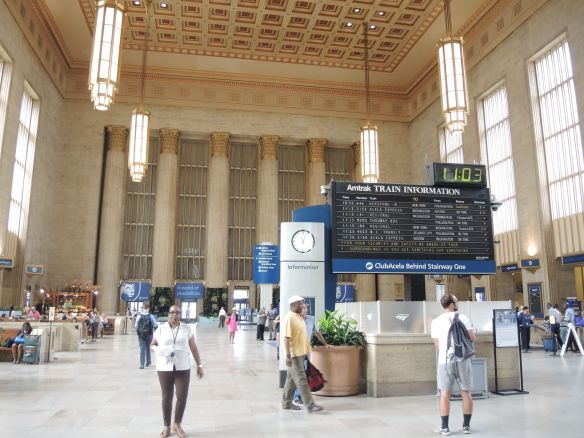 The central train schedule in the main hall. Amtrak and Acela trains are listed on this board.

I found this video by director and producer Max Goldberg of five five collective that pays homage to the arrival board. It captures the sound of the board changing!

The station’s exterior is covered with scaffolding as apparently work is being completed. There is a modern sign in front that is new. Behind the flags in the photo below the awning covering the SEPTA tracks can be seen. The area inside the scaffolding features a food court. There is also a news stand and florist.

Located across the Schuylkill River from Center City Philadelphia, 30th Street Station is a convenient hub for commuters and tourists alike to access Philadelphia. The building itself is worth a visit even if you are not taking a train into the city.

When I rushed to catch a train later that night, I did not have time to stop and take photos, but I did look around with wonder and appreciation of the architecture of this beautiful building.

Here are my 2019 #bestnine. I love this year in review on Instagram posts as it’s fun to see what interested people the most. Not surprising that my Halloween video in homage to Celeste Barber was the most liked/viewed, or that my photo with THE Christian Louboutin was in the top three. Of all my car photos I post, I was surprised that the two most popular featured DeTomaso Panteras! A lovely photo of Cornwall, two photos of eating/drinking while traveling (Cretan food in Athens and gin in Salamanca Spain) highlighted the travel entries. An open runway was liked by the AV Geeks. And a photo from my seat at the Tournament of Roses parade - a bucket list item checked off a year ago. Let’s see what will strike everyone’s likes in 2020!
Hard to believe a week and a half ago, the boys were visiting Santa at the Redondo Beach Dog Park. Thanks to the Redondo Beach K9 team for making Santa available for the fur kids. Then on Monday Koa got sick....and we’ve been at the Vet or the Vet Hospital every day since. Koa has stomach surgery and is recovering at the hospital while Lau Lau is home with us enjoying being the only “kid.” And, I started an @instagram account for the boys, and then it disappeared. ☹️ It’s been a rough week.
Fly to Chicago O’Hare, walk about 10 minutes past baggage claim and take the train into the heart of Chicago for $2.50! I love when public transit (and specifically trains) link an airport and a city center. #planestrainsf1 #chicago