After several years of gathering to watch Formula 1 on television in bars around Los Angeles, the Los Angeles Formula 1 Fans meetup group gathered for a non-race event to tour the Petersen Automotive Museum last Sunday.

Inspired by a Twitter discussion of Bugattis, group co-leader Mara picked a date in February for us to gather and tour the museum. I had not visited the museum since it re-opened in December, 2015, after a $125 million restoration, so I was excited to see the museum with fellow car racing fans. Not sure how many  people would attend an event that did not involve watching Formula 1, Mara was pleasantly surprised when over twenty people pre-paid so that our group received a discounted ticket rate.

Meeting in the museum lobby, Mara checked everyone in and purchased additional tickets while we mingled and discussed the latest developments in Formula 1 (the hot topic was Nico Rosberg’s surprise retirement, Valtteri Bottas’ signing with Mercedes AMG Petronas to replace him, and Felipe Massa’s un-retiring to drive this year with Williams).

Everyone gathered to pose for a photo in the lobby before we entered the museum.

After trying to squeeze all of us in the elevator, and bouncing a few times, our group split and made our way to the third floor to begin exploring the museum. The top floor featured early cars, such as this replica of the first practical car, an 1886 Benz Patent Motorwagen, as well as General Motor’s 1996 EV1, the world’s first mass-produced electric powered vehicle.

The first practical car – an 1886 Benz Patent Motorwagen (replica). One prototype was built and 25 replicas.

This being Los Angeles, the home of Hollywood and the film industry, there are several cars featured in movies on display.

We wandered the exhibits on our own pace chatting with fellow F1 fans.

This 1953 Nash-Healy was particularly beautiful. 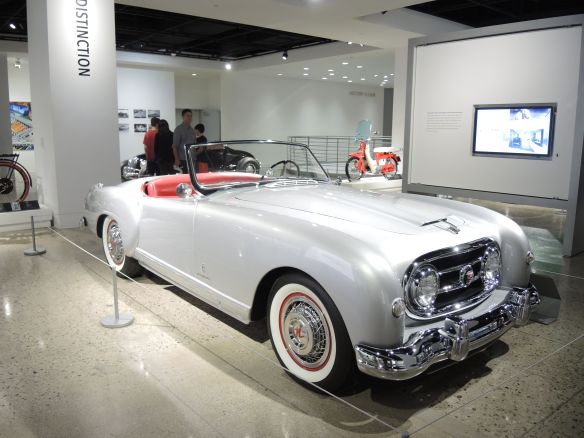 For those more interested in race cars, this 1997 Porsche 911 Gt1 was a special treat to see. 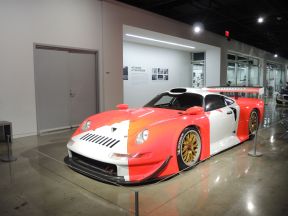 The McLaren P1 on display showcases the production vehicles developed by the other side of the McLaren F1 team parent company.

Dan Gurney memorabilia on display includes the original magnum of Moet & Chandon champagne he sprayed from the podium when he and A.J. Foyt won the 1967 24 Hours of Le Mans.

The ground floor of the museum featured a large exhibit on the Bugatti. Most of the cars are from the Mullin Auto Museum (perhaps one day we can organize a group visit there).

Mara suggested that we meet at Tom Bergin’s (the second oldest bar in Los Angeles) down the street from the museum once we were finished touring the museum. I was part of the last of our group that was in the museum, and there was a small remaining group in Tom Bergin’s by the time I arrived that enjoyed beer, Irish coffee and lunch together. 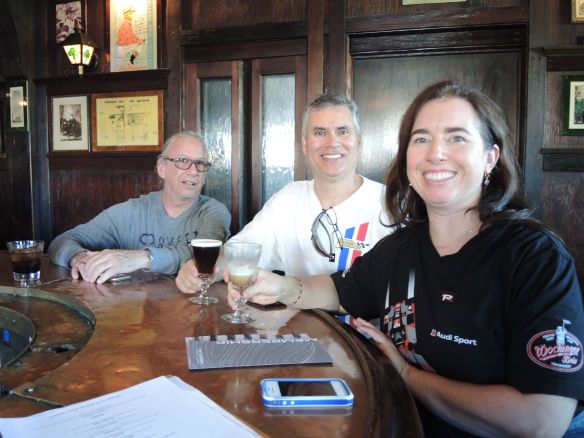 John, Dave and Kiera enjoying Irish coffee at the bar at Tom Bergin’s

In all, the first LA F1 Fans non-race meetup activity was a success. Everyone seemed to enjoy the museum and the opportunity to visit with other Formula 1 fans.

Based on the success of this gathering, Mara already scheduled our next meetup on March 12th to visit the Malibu Cars and Coffee gathering.

The 2017 Formula 1 season opens on March 26th with the Australian Grand Prix. Join the Los Angeles Formula 1 fans meetup group to see where we will gather to watch the race.

First new post of 2020 is dreaming of 🎶 leaving on a jet plane, don’t know when I’ll be back again... 🎶. Dreaming about where to explore this year, or where to return. This is on my Air Canada flight departing from Keflavík airport in Iceland after a wonderful trip there in 2018. I wasn’t expecting to enjoy 🇮🇸 as much as I did, and now I’d like to return, and maybe visit the Faroe Islands too. But wherever I go, I will always request the window seat. Don’t you? #planestrainsf1
Here are my 2019 #bestnine. I love this year in review on Instagram posts as it’s fun to see what interested people the most. Not surprising that my Halloween video in homage to Celeste Barber was the most liked/viewed, or that my photo with THE Christian Louboutin was in the top three. Of all my car photos I post, I was surprised that the two most popular featured DeTomaso Panteras! A lovely photo of Cornwall, two photos of eating/drinking while traveling (Cretan food in Athens and gin in Salamanca Spain) highlighted the travel entries. An open runway was liked by the AV Geeks. And a photo from my seat at the Tournament of Roses parade - a bucket list item checked off a year ago. Let’s see what will strike everyone’s likes in 2020!
Hard to believe a week and a half ago, the boys were visiting Santa at the Redondo Beach Dog Park. Thanks to the Redondo Beach K9 team for making Santa available for the fur kids. Then on Monday Koa got sick....and we’ve been at the Vet or the Vet Hospital every day since. Koa has stomach surgery and is recovering at the hospital while Lau Lau is home with us enjoying being the only “kid.” And, I started an @instagram account for the boys, and then it disappeared. ☹️ It’s been a rough week.