We are flying to Oahu early next week – and I’m already anticipating our regular visit to Leonard’s in Honolulu. I honestly do not know how I knew to visit Leonard’s (although Dave says that he told me about it), but for my first trip to Hawaii back in 2001, we visited, and I have made a stop there almost every year since then. 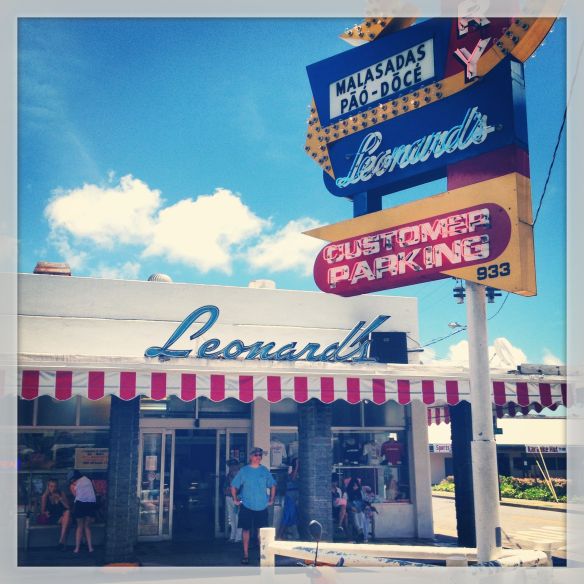 My first trip to Oahu was as an alumni relations officer for the University of Pennsylvania, so it is only fitting that I first learned of malasadas when I was a student at Penn. Each year, Penn hosts, “Spring Fling,” a weekend festival for students featuring parties, performances, band, fun games and activities, and a break from attending classes, writing papers, and taking exams. Held in the Quadrangle at Penn, there were many food booths on the perimeter of the lower Quad area, and one food booth that was there every year was the Hawaii Penn Club, manned by students from Hawaii. They sold malasadas in their booth. I did not think much of it, other than that’s must be what they eat in Hawaii.

Flash forward to my first trip to Oahu and tasting malsadas from Leonard’s. And, oh my goodness….they are good. So good. Fresh, warm dough covered in sugar, and inside is delicious filling of chocolate, haupia, or custard. Quite simply, Leonard’s malasadas are to die for.

Malasadas from our last trip to Honolulu in February, 2016.

Basically a malasada is a very doughy doughnut, covered in sugar and often filled on the inside with a pudding or custard. As described on the Leonard’s website:

A malasada is a Portugese doughnut without a hole. We fry generously-sized balls of dough until it’s golden brown on the outside and light & fluffy on the inside.

There’s a story inside Leonard’s about the bakery (they do sell cakes, cookies and other goodies, but honestly, we only come for the malasadas), and the Portuguese origins of the malasadas. Here is a bit of the history of Leonard’s, also from their website:

In June 1882 the British sailing ship ‘Monarch’ brought Arsenio and Amelia DoRego from San Miguel Island, Portugal to Maui, Hawai’i under contract to work the sugar cane fields. Some 33 years later, their grandson Leonard was born. In 1946 Leonard and his wife Margaret moved to Honolulu with their daughter Diane, age 8. Leonard worked at Snowflake Bakery until he founded Leonard’s Bakery℠ in 1952.

Leonard and Margaret were no strangers to hard work, both coming from very large families. The bakery prospered. Not long after opening, Leonard’s mother suggested making malasadas for Shrove Tuesday – a Portuguese tradition. Although thinking it may be too ethnic, Leonard’s bakers complied. Malasadas were a huge hit. And, the appetite for malasadas in Hawaii was born. 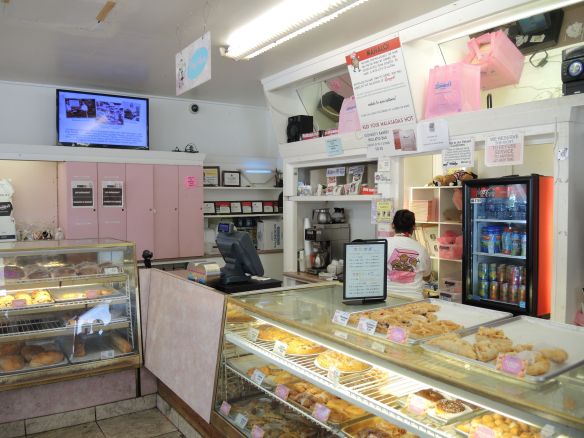 The inside of Leonard’s bakery in August, 2015.

Leonard’s is a short ride from the hotels in Waikiki, and we’ve walkdc there in the morning from our hotel – so we feel less guilty about eating a second malasada. Because you can’t only have one!

There is always a line whenever we visit, though it moves quickly. Even though the parking lot is small (see in the photo above), people do not stay there long, so cars are always pulling in and out of the lot. There is street parking on the side streets, but if you wait a few minutes, a spot will open.

Since they sell so many, the malasadas are always fresh. You can take some to eat later (we brought some back on the plane once), but they really are best enjoyed the day you purchase them.

The distinctive pink box with blue type holds delicious Leonard’s malasadas. This photo is from July 2011.

Leonard’s offers several different fillings for the malasadas  – the chocolate is our favorite, although for me haupia (coconut) is a close second. There is a flavor of the month – guava is one I remember, and you have to try the monthly special! There are also different sugaring options – regular, cinnamoin and Li Hing. Regular sugar is delicious, but Li Hing is also pretty tasty. It’s a sweet-sour taste, that adds to the flavor of the malasadas.

The Malasada menu at Leonard’s

We did enjoy a malasada at one other bakery once during a previous trip to Honolulu, and it was good, but it wasn’t as good as Leonard’s. So, we’ll stick with what we know and love. 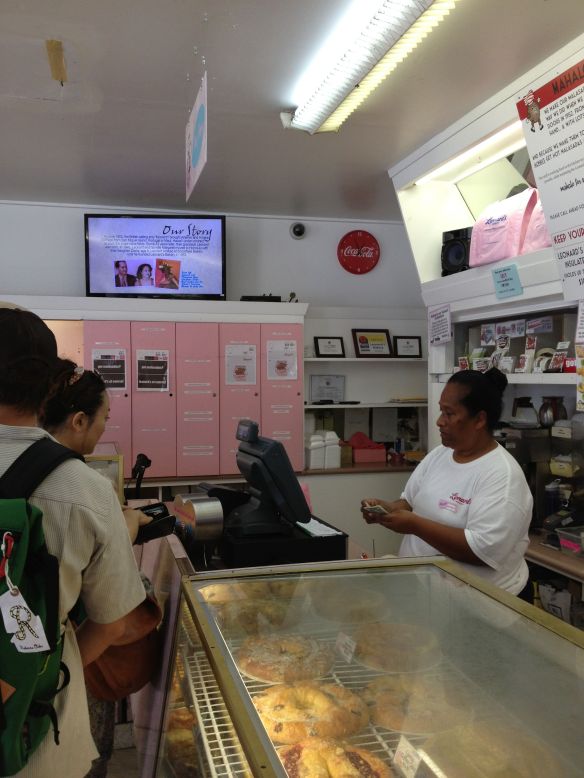 There’s always a line at Leonard’s, but it moves quickly. Here is the line and cashier in August, 2013.

You know that I’ve been talking about Leonard’s a lot when one of my friends said when she thinks of Hawaii, me and malasadas come to mind! Basically, whenever someone mentions that they are traveling to Oahu, I tell them that they must stop at Leonard’s!

Have you visited Honolulu and tried a malasada from Leonard’s?

If you haven’t stopped by Leonard’s before, I highly recommend you make it a stop on your next visit to Honolulu!

Here is Leonard’s on a map:

And here’s a view on the map so you can see how it is relatively close to Waikiki – and also to H1, so if you leave your hotel in Waikiki, you can make your way to Leonard’s before jumping on the H1 to get to Hanauma Bay, for example: 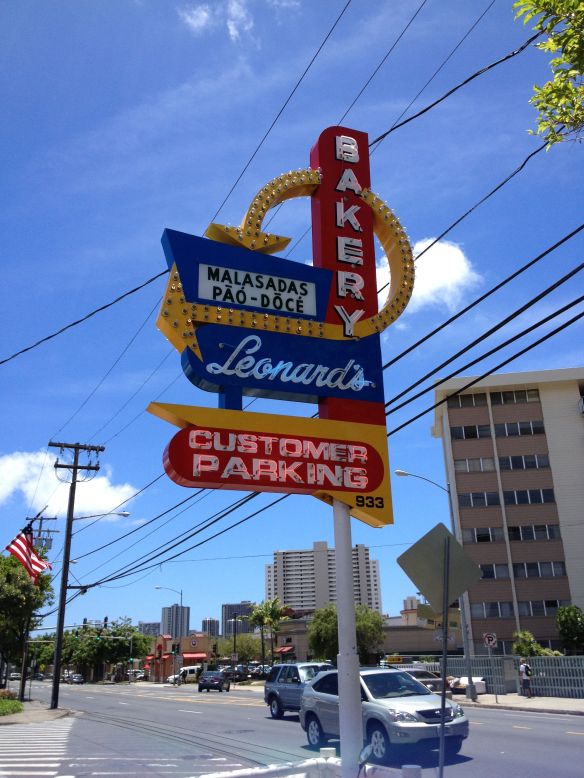 I love the distinctive pink box!

The warm sun hits a colorful building in Trinidad, Cuba

Two weeks ago, as everyone on the east coast was suffering from record low temperatures, snow and ice, the theme for #FriFotos was WARM.

It was fun to look through my photos and see which ones depicted a warm-feel. The first photo above is from Trinidad, Cuba. This colonial town is bathed in beautiful light early in the morning, which is when two of the travelers in our group and I took a taxi into town ahead of our guided tour so we could wander the streets and take photos. The lighting was just right, and the colors of the town popped everywhere we turned.

When I visited Rome in May of 2013, it was a bit cooler than I expected. I ended up wearing several of my t-shirts at once to keep warm. But the warmth of the sun on this bright day, showcased the beauty of the city. We were at the top of the Vittorio Emanuele II monument when I took this photo.

Rome on a warm, sunny day as seen from the Vittorio Emanuele II monument (aka The Wedding Cake)

One of my favorite places in the world is the island of Kauai in the state of Hawaii. We always stay on the North Shore, where there is beautiful scenery and lush vegetation. This photo is of the Hanalei Valley lookout – there are always cars here stopped to take photos of this scene overlooking the taro fields.

We were in Buenos Aires in May of 2014, and as it is the start of winter in the part of the world, the weather was cool. But the lighting at the end of the day warmed up the luxurious Hotel Alvear.

In December, I flew to Honolulu to meet up with my friend Rosemary who had traveled to Hawaii for the very first time in order to attend the opening ceremony of, “The Eddie.” This annual invitational big-wave surf competition was celebrating it’s 30th year, although the event has only been held nine times. Waves need to reach a certain height for a sustained period in Waimea Bay on Oahu’s North Shore in order for the competition to run. At the beginning of the holding period each year (usually from early December through late February when the North Shore waves are the biggest), there is an opening ceremony with the Aikau Ohana and the invited surfers and alternates for the competition. After the opening ceremony, the surfers paddle out to the ocean for a ceremony. You can see more photos from the opening ceremony, which was on December 4, 2014, here.

Paddle-out for the opening ceremony of The Eddie in Waimea Bay, Oahu.

The sunsets in Hawaii are always spectacular, and on my last night there in December, the sunset in Waikiki did not disappoint. It was a warm aloha before my flight home that night.