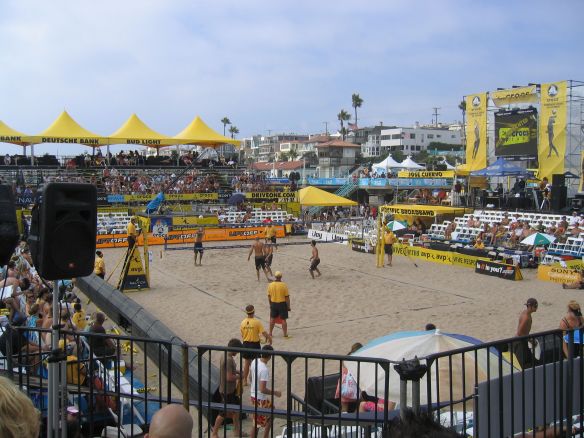 Today qualification play begins for the AVP Manhattan Beach Open in Manhattan Beach, California. Match play continues tomorrow and Saturday with the finals on Sunday, July 17th. Known by players and fans alike as the “Wimbledon of Beach Volleyball,” this is the tournament all US players want to win at least once in their careers. Held in Manhattan Beach for the 57th year, this year’s tournament features six of the eight United States beach volleyball players heading to the Summer Olympic Games in Rio in August.

If you are in Los Angeles this weekend, make your way to Manhattan Beach to catch some of the top volleyball players in the world compete! Players who win the tournament have their names immortalized on the Manhattan Beach pier a year after their win.

The Manhattan Beach pier, as seen in October 2013 during the #FoggyPierPressure Instameet. Plaques for the winner of each year’s Manhattan Beach Open are embedded in the pier.

Usually, the Open is held in mid-August, but since the Olympics will be happening at that time, the tournament was moved to this weekend in July. In years past, the Open was held after the Olympics and it was a great chance to see US Olympians compete after returning home from the games. Many of the players competing this weekend live in and around the Beach Cities/South Bay area of Los Angeles, so this is also considered a home tournament for them.

During the early rounds of the tournament, you can wander from court to court, and watch different matches with your beach towel or chair. There is always a crowd, but during play on Thursday and Friday, it is easier to get a courtside seat.

Karch Kiraly and Larry Witt play during the 2006 MB Open

Local papers The Beach Reporter and Easy Reader News both have articles about this year’s tournament, and more information on the schedule, draw and athletes competing can be found on the AVP tour website.

As we have been out of town the last two years, I am excited to head down to the beach and catch some of the action this weekend. If you are not local to Los Angeles, you can watch the final matches on Sunday on NBC.

Play on one of the large courts during the 2006 Manhattan Beach Open. In the far court are teammates Stein Metzger and Mike Lambert.

A women’s match during the 2006 Manhattan Beach Open. 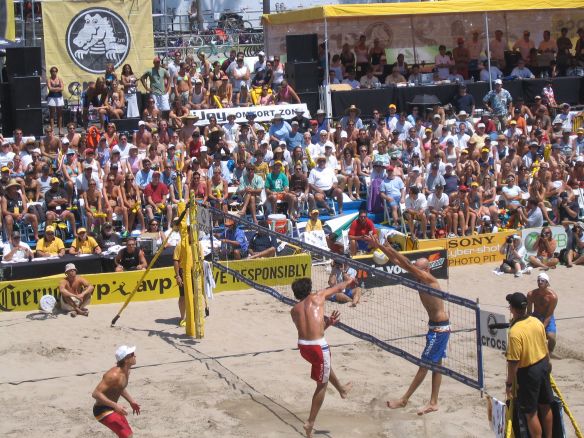 Another shot of the final match in the 2006 Manhattan Beach Open between Stein Metzger/Mike Lambert and Phil Dalhausser/Todd Rogers. On the elevated stage, right under the Crocs logo you can spot Laird Hamilton bent over with his hands on his knees watching the match.