The 24 Hours of Le Mans is the most prestigious endurance car race in the world. Held in mid-June each year, to make the most of long summer days, the race draws hundreds of thousands of spectators to watch cars race around a track that in sections includes local streets in Le Mans, France, for a continuous 24 hours.

We attended the 24 Hours of Le Mans in 2010 with a UK car club. The group stayed in a hotel north of Le Mans, and we used that as our home base for the days leading up to the race. We would car pool or taxi into town or the track to take part in that day’s pre-race activities, then return to our hotel for a multi-course gourmet French dinner. For the race itself, we watched the start and several hours of racing before returning to the hotel for dinner and a shortened night’s sleep. We awoke early on Sunday morning to make our way back to the track for the conclusion of the race.

It was a fun experience, but we also knew that many people say the only way to experience Le Mans is to camp at the track so you can catch all of the action, moving around to different viewing points and watching the cars race as day turns to night and then back to day again.

Knowing that it often rains during the race weekend and that the temperatures are cool (50 degrees Fahrenheit at night and in the mid 60s during the day), we were hesitant to commit to camping at the track. Dave’s friend suggested we join the camping area with the Audi Club of North America and Audi Club International. Since Dave is an ACNA member, we decided to try the camping experience, and we sent in a reservation for a camp spot.

We already own a small tent from the one time we camped at Sears Point (now Sonoma Raceway) in Northern California. But we didn’t have sleeping bags, sleeping mattresses, rain gear or any of the many other supplies that were recommended. While I was researching what to bring and what to expect, I discovered the Beer Mountain site which bills itself as the, “Home of the Le Mans Survival Guide.” A forum specifically for those traveling to camp at Le Mans, it has ratings on the various camping areas around the track as well as forums where all manner of questions and discussion threads are ongoing about what to bring, how to travel there, where to sit at the start, etc. I registered in order to participate in the forums and found the members very welcoming and knowledgeable. I also searched for blogs or articles written by those that had traveled to Le Mans and camped, and I started a Pinterest board to keep track of the sites I discovered.

As we prepared to travel to France, we set up our tent, rolled out our new sleeping bags and “tested” them both outside and in the house. While I found a more compact sleeping bag, we decided to keep the Marmot bags we purchased on sale at REI that are rated for 45ºF. We opted for a basic sleeping mattress, and we are bringing painters plastic sheets to use as a tent footprint and also inside the tent in case there is a rain deluge. 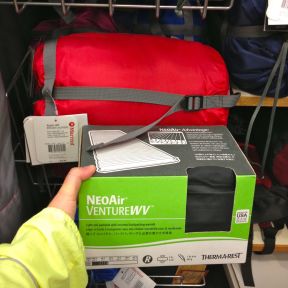 Taking photos to compare the sizes of the sleeping bags. 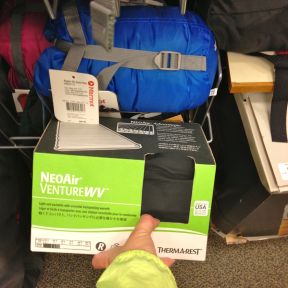 This bag was much more compact but not rated as warm. 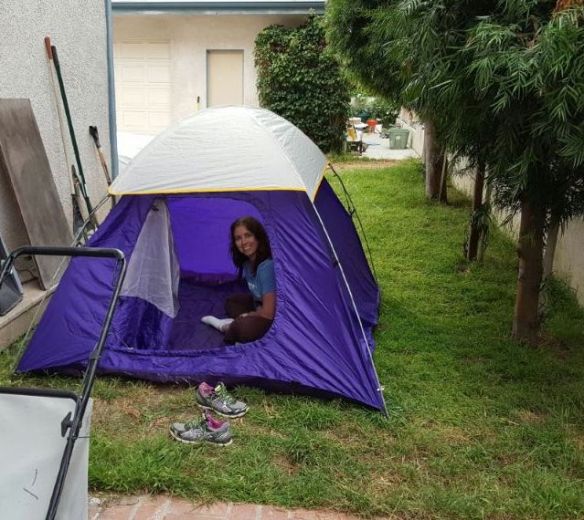 The tent set up – it stands! We’re not sure how waterproof it is though. 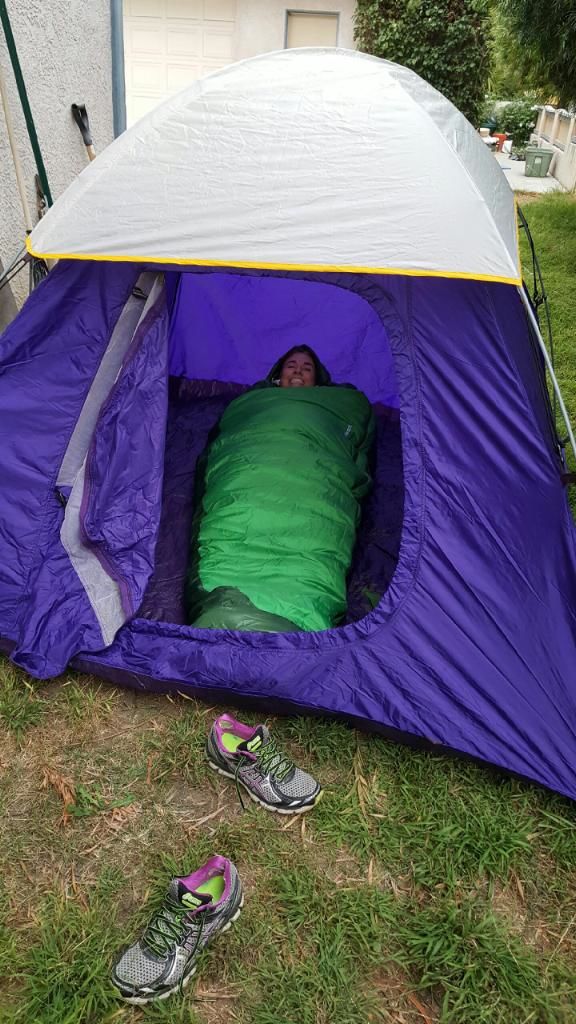 The sleeping bag in the tent. The tent will fit our two bags and not much else.

I kept scouring the Beer Mountain site, visiting local sporting goods stores, searching on Amazon.com and talking to Dave’s friend Dave (who is also traveling to Le Mans and will camp with ACNA too) for the best supplies to purchase. Part of our dilemma is that we are not campers, so we had to weigh purchasing top quality gear that we might only use once versus the high cost of the gear versus keeping warm and dry and comfortable while camping for four nights. 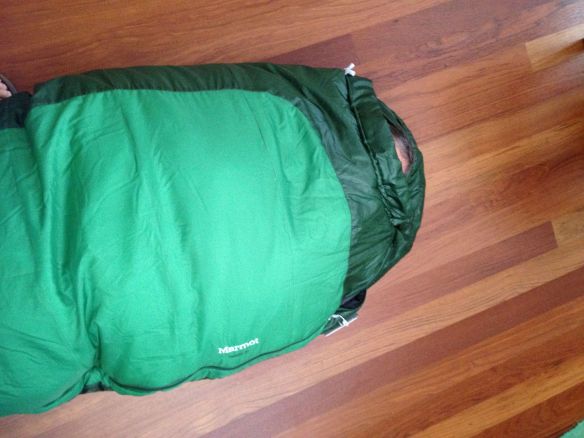 Dave testing the mummy-style sleeping bag by zipping it all the way to his head. 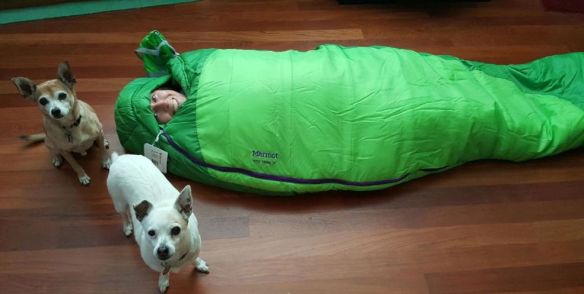 While I was testing the sleeping bag, Koa and Lau Lau were very interested in what I was doing on the floor.

Our friend Dave sent me the list of the gear he purchased, and I was especially interested in a small chair he found for $39.99. I ordered two; they are very light weight and are packed in a small carry bag. This will be nice to have at our campsite and also if we wander around to other viewing areas on the track during the race. 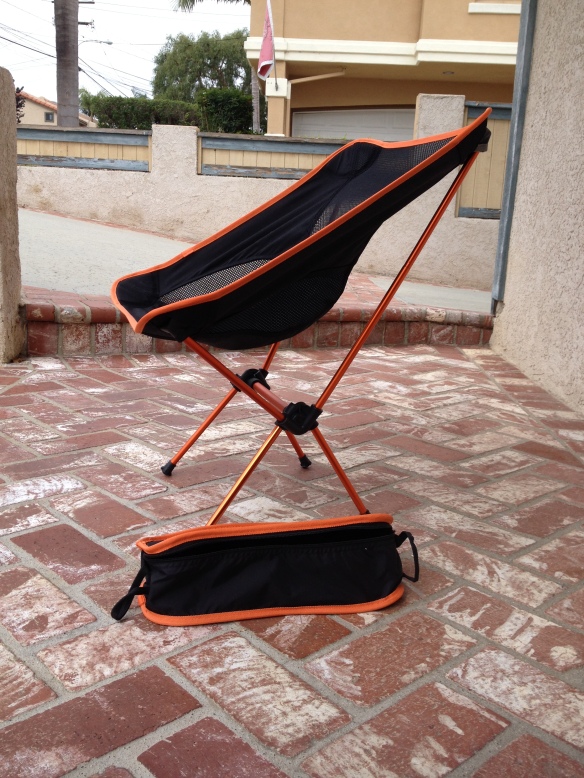 This chair, once folded, fits into the small bag pictured here. It is very light weight.

As I brought items home from the store, or as they arrived from shipping, we put them into my large suitcase, testing to see how everything would all fit together. 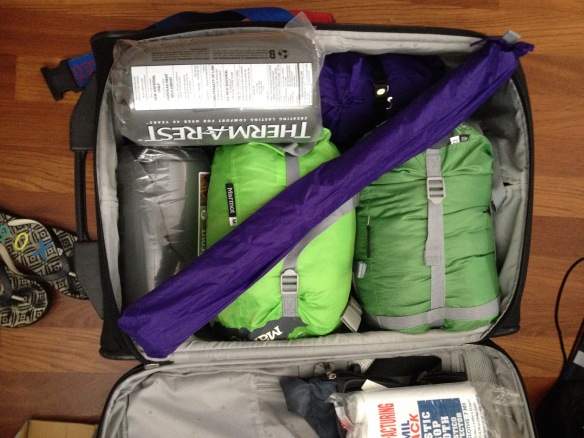 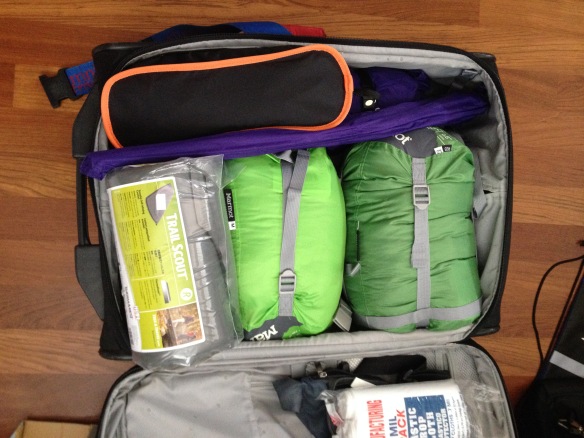 This view shows one of the chair bags.

In addition to the camping gear, I also purchased a rain jacket (on sale at Sports Chalet which is going out of business), rain pants, and waterproof hiking shoes.

For our flight to Paris, we packed all the camping gear in my large suitcase and checked it as baggage. We each had a roller-bag to bring on the plane that contained our clothes and toiletries, and we each had a backpack, mainly for wallets, electronics and our camera.

We arrived yesterday (Sunday) in Paris, picked up our rental car and drove straight to Le Mans for scrutineering (the cars are inspected for technical requirements for the race). The weather was alternating between pouring rain and gray skies with brief periods of sunshine. It provided a good idea for what to expect as the weather report for the remainder of the week is similar – temperature highs in the 60ºs F to lows in the 50ºs F with rain showers on and off all day. We are staying in hotels this week until Thursday when the campsites open for the race, and then we will see if we made the right decisions in what to bring with us!

To follow along as we capture the race activities in Le Mans this week, you can see my social media posts with the hashtag #KRLeMans on Twitter and Instagram. The official hashtag for the race itself is #LeMans24.

If you have attended the 24 Hours of Le Mans before, or have tips on what to bring for camping trips, please let me know in the comments below.