Watching the Rio Summer Olympics last week and this week brings back memories of attending the Atlanta Summer Games in 1996. Tonight is the final of the Men’s 200M in Track and Field, and I remember watching the 200M final in 1996 when Michael Johnson broke his own world record and won the gold medal.

Track and field are my favorite events at the Olympics, and after entering the Olympic ticket lottery, I was thrilled that I received several tickets to the track and field events. I was even more excited that we were there to witness the 200M final.

It was a thrill to be in the packed stadium, watching the buildup to the start of the race.

Back in 1996, I only had a simple film camera (no digital cameras or smart phones back then), so unfortunately, the photos from that historic night are not high quality. 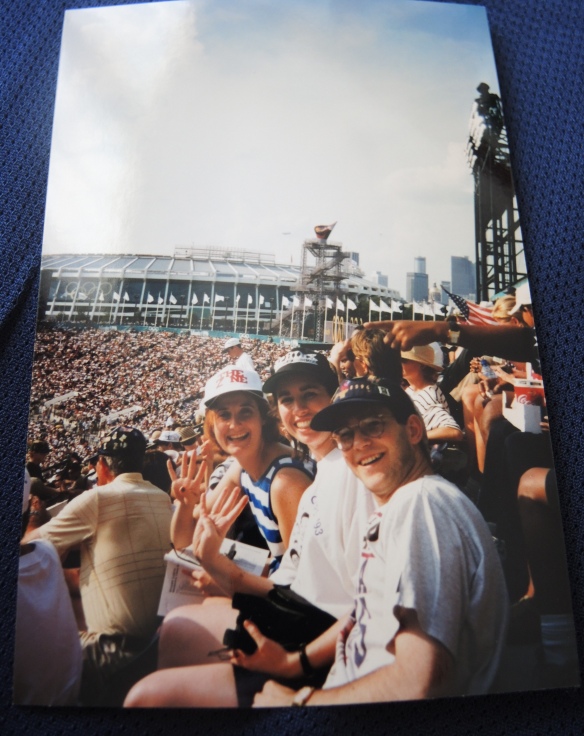 Sitting in the stadium with my friends Jennifer and Ira for the track and field events.

I found this video on YouTube of the race shared by user renjithkadappoor. The commentator mentions Johnson’s top competitors including Ato Boldin of Trinidad and Tobago (now reporting at the Olympics for NBC) who won the bronze medal.

My photo of the scoreboard after Johnson won

Even though my photos are blurry, I still treasure them and the memories of the night that they trigger.

Johnson in triumph after the race. He was easy to spot on the track because of his gold shoes.

My photo of the scoreboard after the race showing all the finishers and Johnson’s world record time of 19.32 seconds.

I still have this Sports Illustrated issue from August 12, 1996, showing Johnson on the cover.

Tonight NBC will air the 200M final from Rio de Janeiro in Brazil. Watching the race on TV, I will remember the historic race that I witnessed in 1996.