Today, June 13th, is World Gin Day. I had no idea about this important date until I saw my friend Ana’s picture of a Gin and Tonic on Instagram (Ana is also known as Mrs. O Around the World). While traveling in the UK, Spain and Portugal this spring, I tried many different gins and thoroughly enjoyed it. Given that today is a special day for gin, I thought I would highlight one of my recent gin experiences.

While on a tour of Britain in April (Insight Vacations’ “Best of Britain”), our group took a half day trip to Plymouth. Most of the morning was spent on a boat tour of the harbor to provide us a visual history of the importance of this port city. After the harbor tour, we had about an hour to walk around and explore on our own. I stumbled upon the Plymouth Gin distillery and decided to step inside.

Here is a brief history of the Black Friars Distillery, where Plymouth Gin is made, from their website:

The building dates back to the early 1400s, with the most intact part of the distillery, the Refectory Room – a medieval hall with a fine hull-shaped timber roof built in 1431, being one of the oldest buildings in Plymouth. It is thus protected as a national monument and is one of the city’s most precious heritages. The Distillery buildings were formerly a monastery inhabited by the Black Friars. In 1536, at the time of the Reformation and dissolution of the monasteries, the former home of the Black Friars was put to a variety of other uses including being the town’s Marshalsea or debtor’s prison. It was also the first Non-Conformist meeting place and a billet for Huguenot refugees who fled France for Plymouth. The Pilgrim Fathers even spent their last night in England here in 1620. It was from the distillery they made the short walk down to the harbour to set sail on the Mayflower on their epic voyage to start a new life in America, where they founded a new Plymouth. The Mayflower ship forms Plymouth Gin’s trademark label today. Black Friars is indisputably the oldest working gin distillery with records of a ‘mault-house’ on the premises going back to 1697. However, it was in 1793 that Mr Coates joined the established distilling business of Fox & Williamson and the distilling of Plymouth Gin began. Soon the business was to become known as Coates & Co, which it remained until March 2004.

How interesting to learn that the Pilgrims spent their last night here before departing for America! Unfortunately, there was not enough time for me to take a tour; but if you have the time, there are several options offered, including a Master Distiller’s tour in which you can create and distill your own gin recipe!

The Black Friars Distillery, where Plymouth Gin is made, in Plymouth, England.

When I stepped inside the distillery, I bumped into fellow travelers Laurie and Linda. I convinced them we needed to try some Plymouth Gin, since we were at the source after all! We went upstairs to The Refectory – the bar was beautifully lit, and well stocked with other fine liquors besides Plymouth Gin.

I decided to try the Plymouth Sloe Gin, as I saw that downstairs in the shop, and it looked interesting – and different from the gin I have previously tried. If you can not read the photo below, this is what it says, “Made to a unique recipe that was discovered in notes made by our Head Distiller in 1883. Traditionally enjoyed as a winter warmer when pursuing country sports, now widely used in cocktails, long drinks and as a great accompaniment to cheese. Try it with… Sharphams Brie Style, Quickes Cheddar, Vulscombe Goats Cheese, Devon Blue.” That sounds right up my alley to try this with cheese! 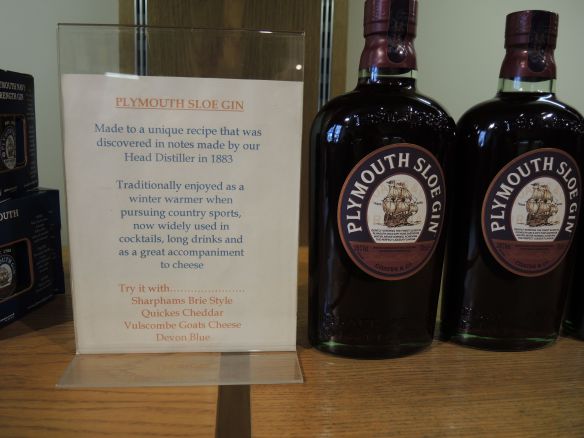 Plymouth Sloe Gin, according to the bartender, it is only available at the distillery.

The Plymouth Sloe Gin is made by steeping sloe berries with the gin. It has a reddish-pink color. I asked for Fever Tree Tonic, another recommendation from Ana, and the bartender said that is the only tonic they serve!

I tried the gin on its own at first, before adding the tonic. It had a lovely fruity taste, and I enjoyed it so much I decided to purchase a bottle to bring home – especially since our bartender said she thought it was only available at the distillery! She mentioned that she had been in New York City recently, and she found Plymouth Original Gin regularly available. I have since seen it here in stores in Los Angeles, but not the Sloe Gin.

Enjoying a lunch-time gin and tonic.

We all enjoyed our drinks, and then rushed back to the coach for our next stop.

Tonight, in honor of World Gin Day, I will make some cocktails before dinner. I think a Sloe Gin Fizz with my Plymouth Sloe Gin, straight from the source, sounds just about right on this chilly, June Gloom day in Southern California.

Let me know your favorite gin drink or if there are other sloe gins I should try!