It is hard to believe that a month ago today, my Insights Vacations tour of Amazing Spain and Portugal was coming to an end. Our group arrived in the late afternoon to Salamanca and checked in to the beautiful Hotel Alameda Palace. We all went on a treasure-hunt type walk of the city, looking for figures on some of the city’s buildings and were then on our own for dinner.

Hotel Alameda Palace in Salamanca seen in the early morning.

When I woke the next day, I could see the early morning light casting a beautiful glow on some of the buildings from my hotel room window. I decided to quickly pack my bags and head out for a walk through the city before breakfast and our departure shortly thereafter.

The pedestrian streets were empty – it seemed that no one except for the street cleaners and trash collectors were out, so I was able to walk quickly through the streets trying to capture some golden light on the buildings and churches.

I probably needed to be outside the old city boundary in order to see the sun encasing the buildings in light, as walking within the old town, only the very tops of the structures were lit. It was still fun to walk around on my own and see the buildings with no crowds in front of them, unlike our walk the day before when it seemed like everyone was out enjoying the beautiful night.

An empty street leading to the cathedral. 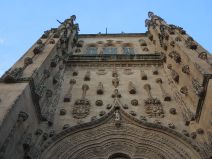 The cathedral is so big that it was hard to fit the top of it in the frame.

The street in front of our hotel had a building lit by the sun.

Plaza Mayor. It was empty in the morning but full of people the night before.

The white design on this building was simple and beautiful.

At this intersection, you have to look up at the buildings.

The Church of San Juan de Sahagun was just down Calle Toro and could be seen from my hotel, with its spire brilliantly lit by the morning sun.

After walking through the empty Plaza Mayor, I came to this street with two prominent buildings that made you look up to the sky to see their detail – the Iglesia de la Clerecia and the Casa de las Conchas, both had a beautiful orange glow thanks to the morning sun.

On the left is Iglesia de la Clerecia and on the right you see the Casa de las Conchas.

The new cathedral in Salamanca is a massive late Gothic and Baroque structure completed between the 16th and 18th centuries. It took forever to walk around the perimeter of the building to see if it was open this early in the morning. Sadly, it was closed until 10:00 am, well after our bus would be departing. The previous night, we arrived shortly after it closed but we saw people walking along the top of the building – it must be a beautiful vantage point to see the entire city.

I saw some beautiful street art on some of the walls covering work being done on the buildings. I am not sure of the style but I saw it repeated in several places. 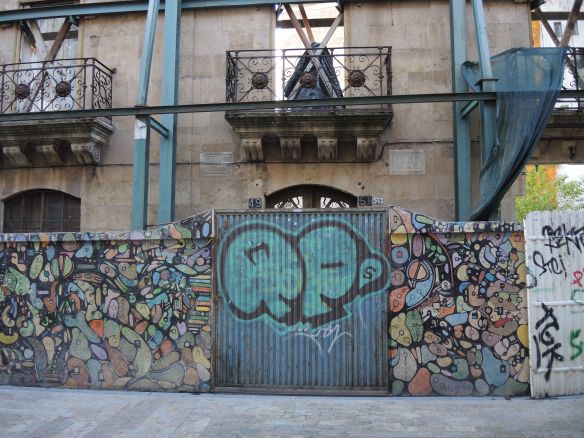 Looking up, I thought I saw some nests up above.

I think these storks have the best “condo” in the city!

Using my camera, I zoomed to catch a glimpse of this stork couple with one of the best views in the city. 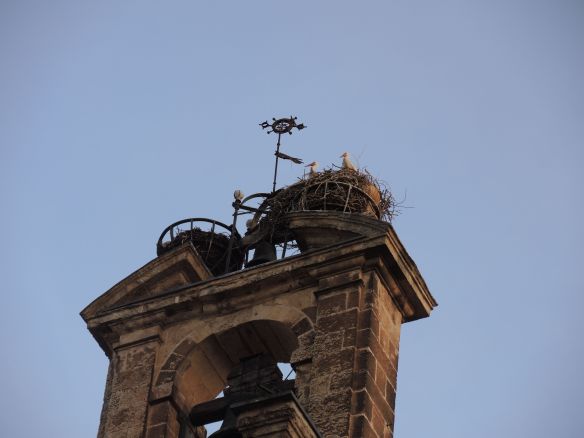 I thought the shadows on this building created by the iron balconies was pretty.

Walking back towards the hotel, I looked back on San Juan de Sahagun, and it was still bathed in sunlight, but it lost the earlier golden glow I saw. 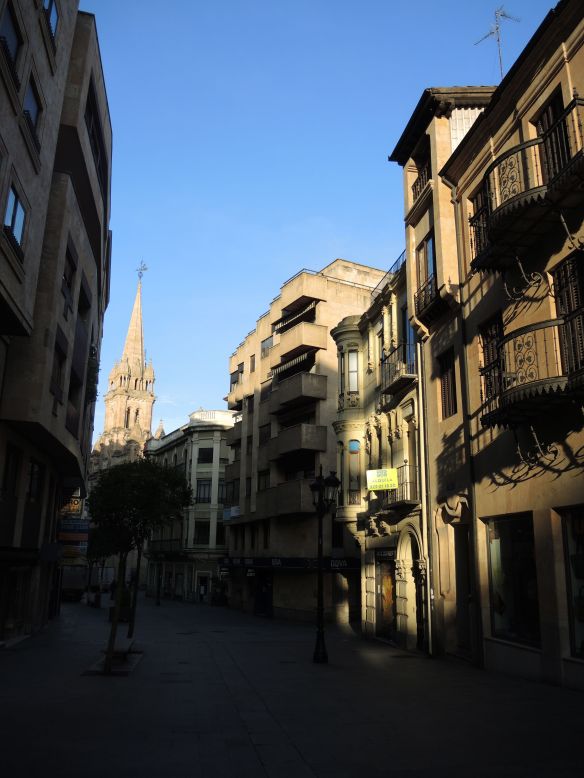 I enjoyed walking around the city, and would have liked to learn more about the University of Salamanca and other sights, but we had only a few hours the night before, and then the early morning when I took this walk to explore. I heard the Art-Deco museum, Casa Lis, is interesting too. Hopefully I can return to wander the streets of Salamanca again.

Have you visited Salamanca? Please share your thoughts below!